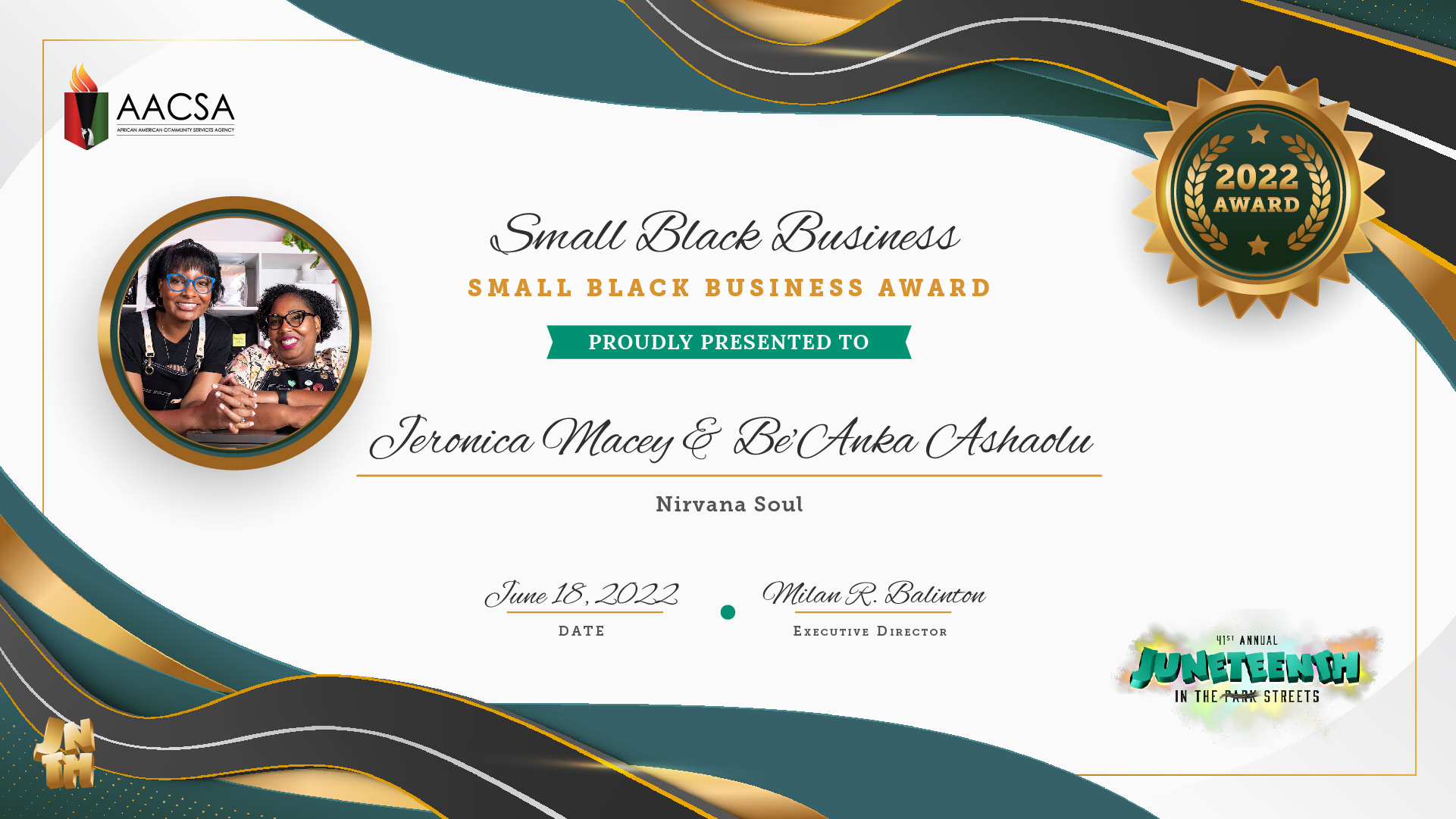 Nirvana Soul is a San Jose-based coffee company bringing exciting flavor, bold inspiration, and undeniable joy to Silicon Valley and beyond. Founded by sisters and best friends, Jeronica Macey and Be’Anka Ashaolu, Nirvana Soul’s mission is to bring people together using the power of coffee and tea.

We’re Jeronica and Be’Anka. Sisters, best friends, and co-founders of Nirvana Soul. Since we were little girls, coffee has held a special, calming place in our hearts. For as long as we can remember, we’ve dreamed of creating a space that feeds our souls and makes people happy.Nirvana Soul’s mission is to bring people together through the power of coffee and tea. We’re focused on delivering you the greatest possible experience, while making San Jose one of the most exceptional places to indulge.

Jeronica Macey is the Co-Founder and CEO of Nirvana Soul Coffee Purveyors. She is a coffee industry veteran with nearly 20 years experience managing, leading, and building great teams and companies. Jeronica served as a barista, shift lead, and multi-shop manager before opening Nirvana Soul in the summer of 2020. Along with her unique perspective in this space and undeniable passion for coffee, she is also inspired by creating experiences that bringpeople from all backgrounds and walks of life together.

Be’Anka Ashaolu is the Co-Founder and CMO of Nirvana Soul Coffee Purveyors. She is an experienced marketing executive with demonstrated success driving teams to create customer experiences that surprise and delight. Be’Anka is a naturally creative person with an eye for well-written content, a passion for well-executed campaigns, and a particular interest in business operations and company culture. Her “why” is to bring out the best in others, typically when it’s hard and especially when it’s scary. The goal is to make a lasting impact and she remains inspired by the work. 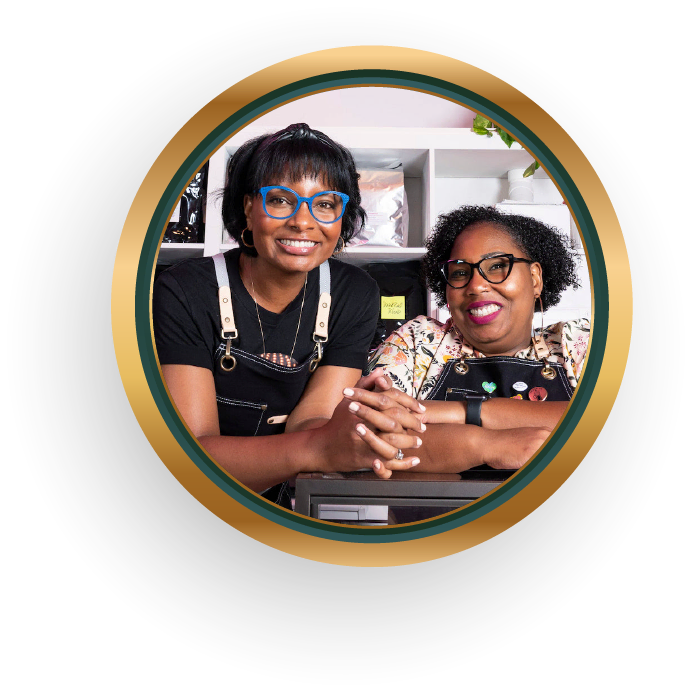 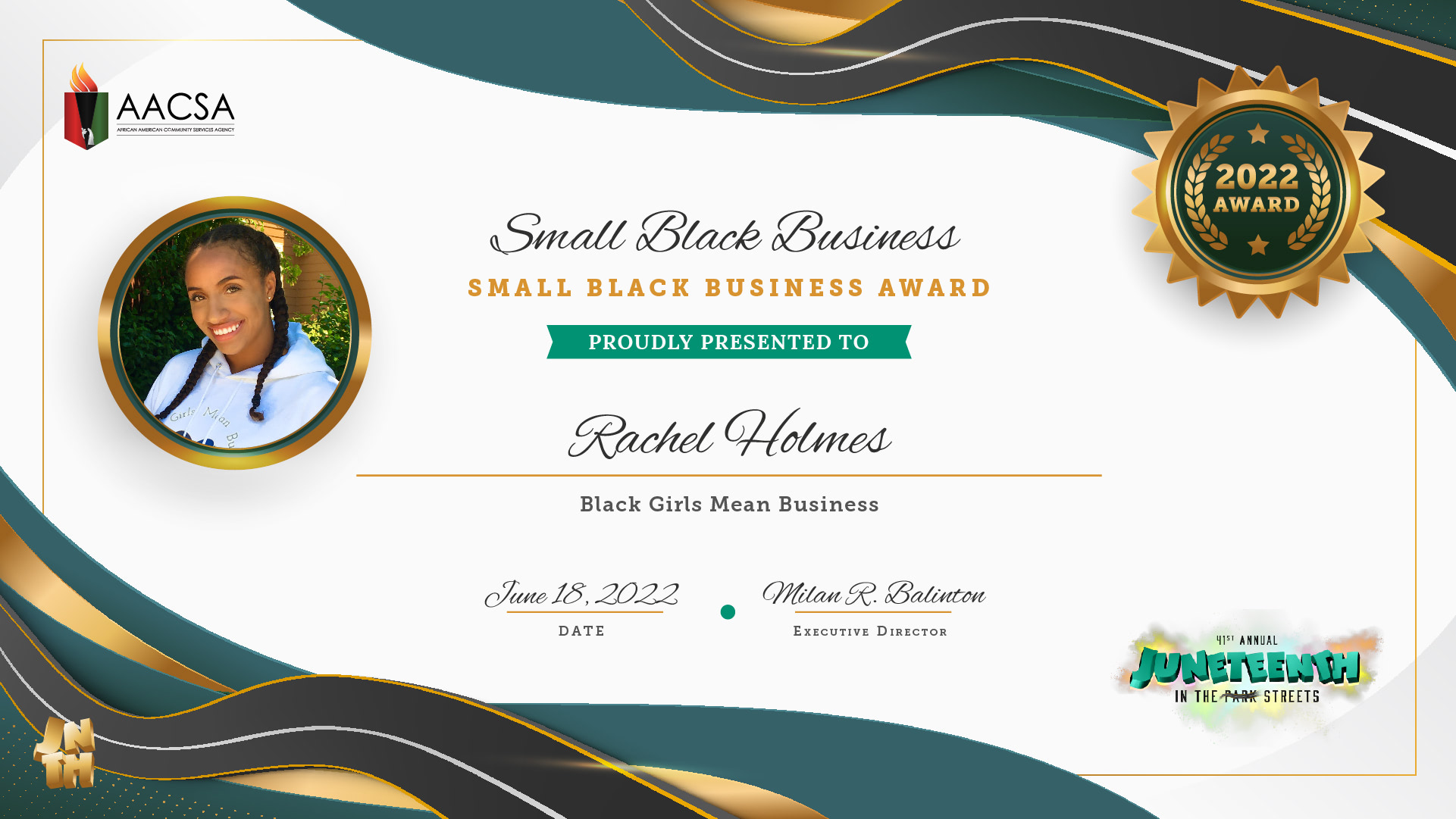 Rachel Holmes is a senior at Silver Creek High School. She is an officer of her school's Black Student Union and a member of the National Honor Society. She has been an artistic swimmer for 11 years and a Girl Scout for 12. She is an aspiring businesswoman and will be attending UC Berkeley in the fall as a Media Studies major.

Rachel is currently working as the Director and Social Media Manager of the program, continuing to grow and expand and hopes to one day make it an official nonprofit. 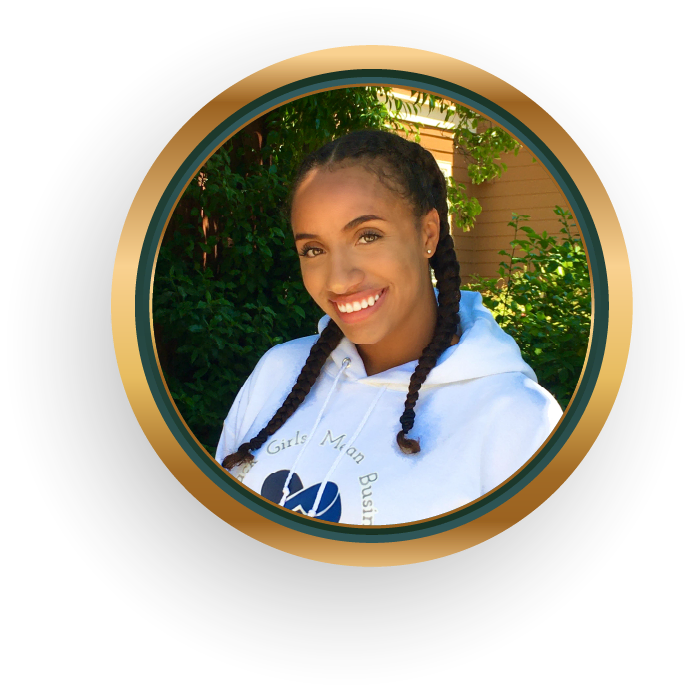 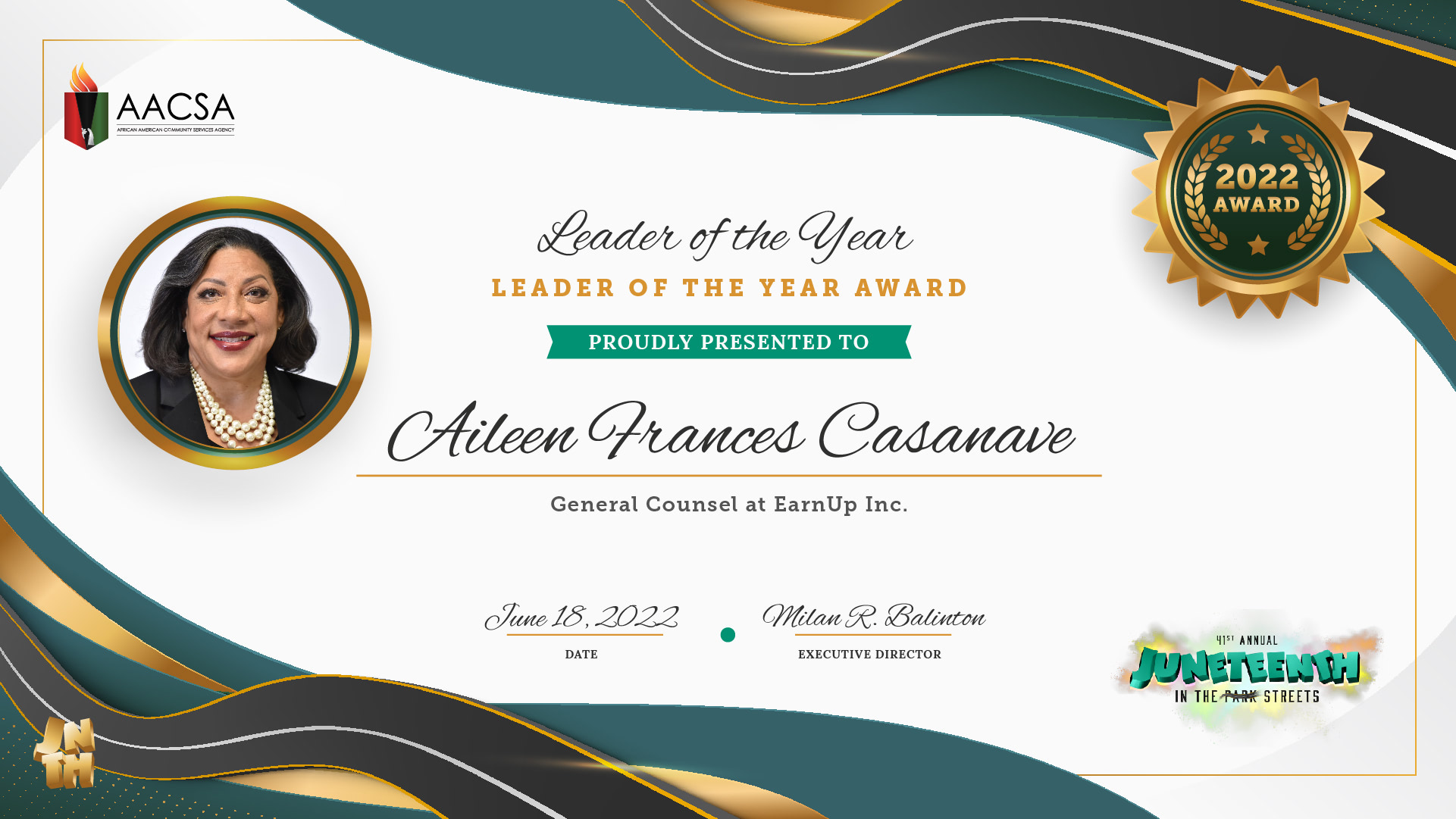 Leader of the Year

Aileen F. Casanave is General Counsel at EarnUp Inc., a fintech startup, where she manages the company’s global legal and regulatory compliance matters. Aileen has been General Counsel or has held senior legal positions at many Silicon Valley companies including Jiff, SingleStore, TIBCO, Sun Microsystems and Lockheed Martin.

Aileen is currently founder and CEO of Casanave Legal Services which provides pro-bono legal services to the many minority community service organizations such as the African American Community Service Agency (AACSA), where she is General Counsel and the Minority Business Consortium and Jamii Technologies.

Aileen received her Bachelors from Vassar College and her Juris Doctorate from the University of San Francisco School of Law. 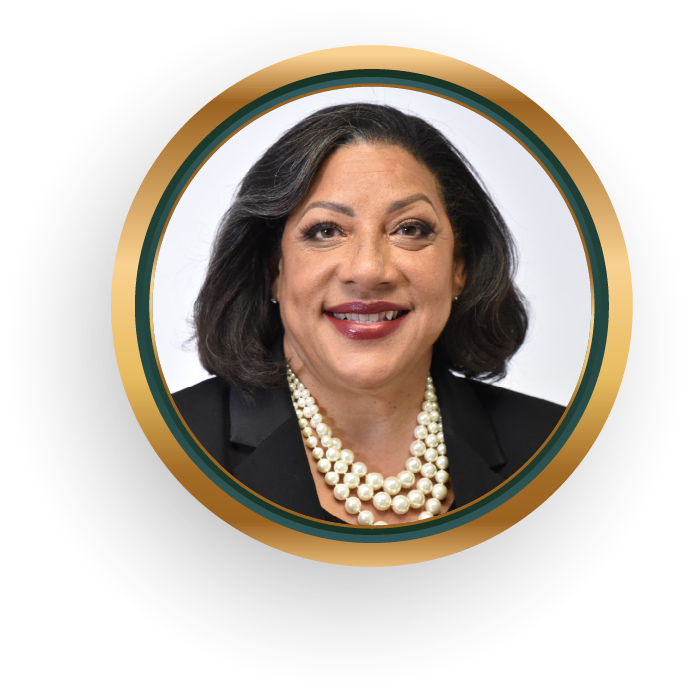 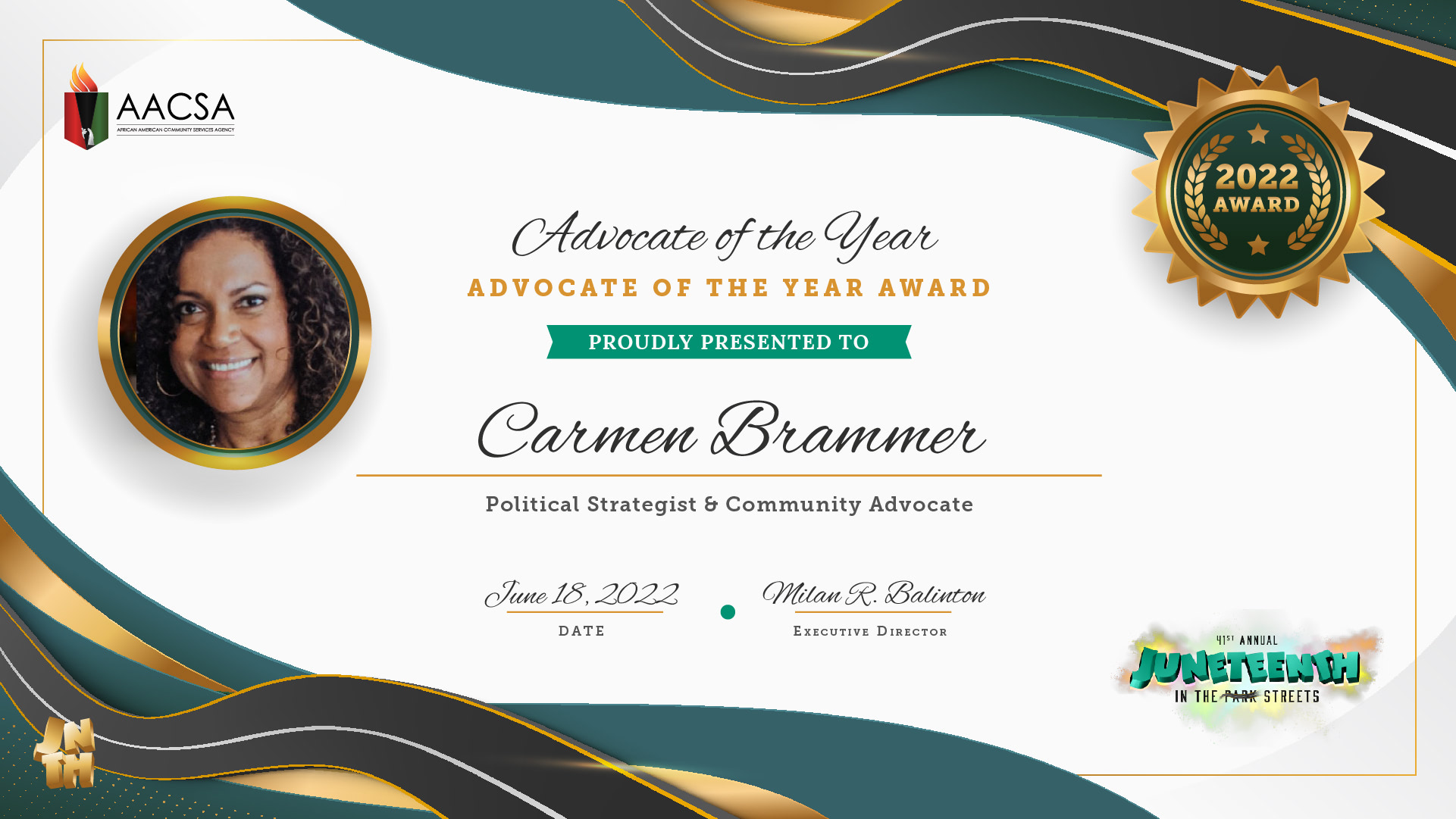 Advocate of the Year

Carmen Brammer is a political strategist and community advocate. She is passionate about improving the lives of neglected communities by exposing and breaking down social inequities and entrenched barriers. As the caregiver for her mom, she is committed to bringing visibility to the issues and much needed changes required within the long-term care industry. She is also an active member of local community based organizations and grassroot groups. 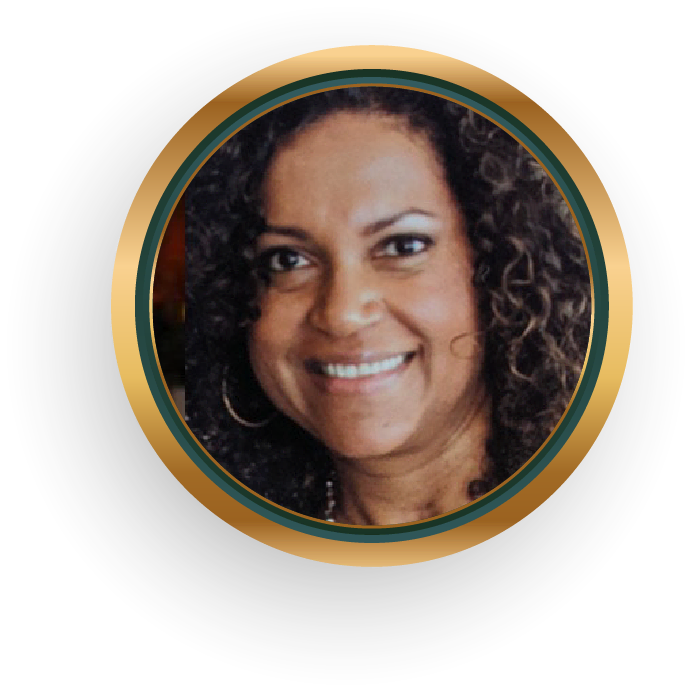 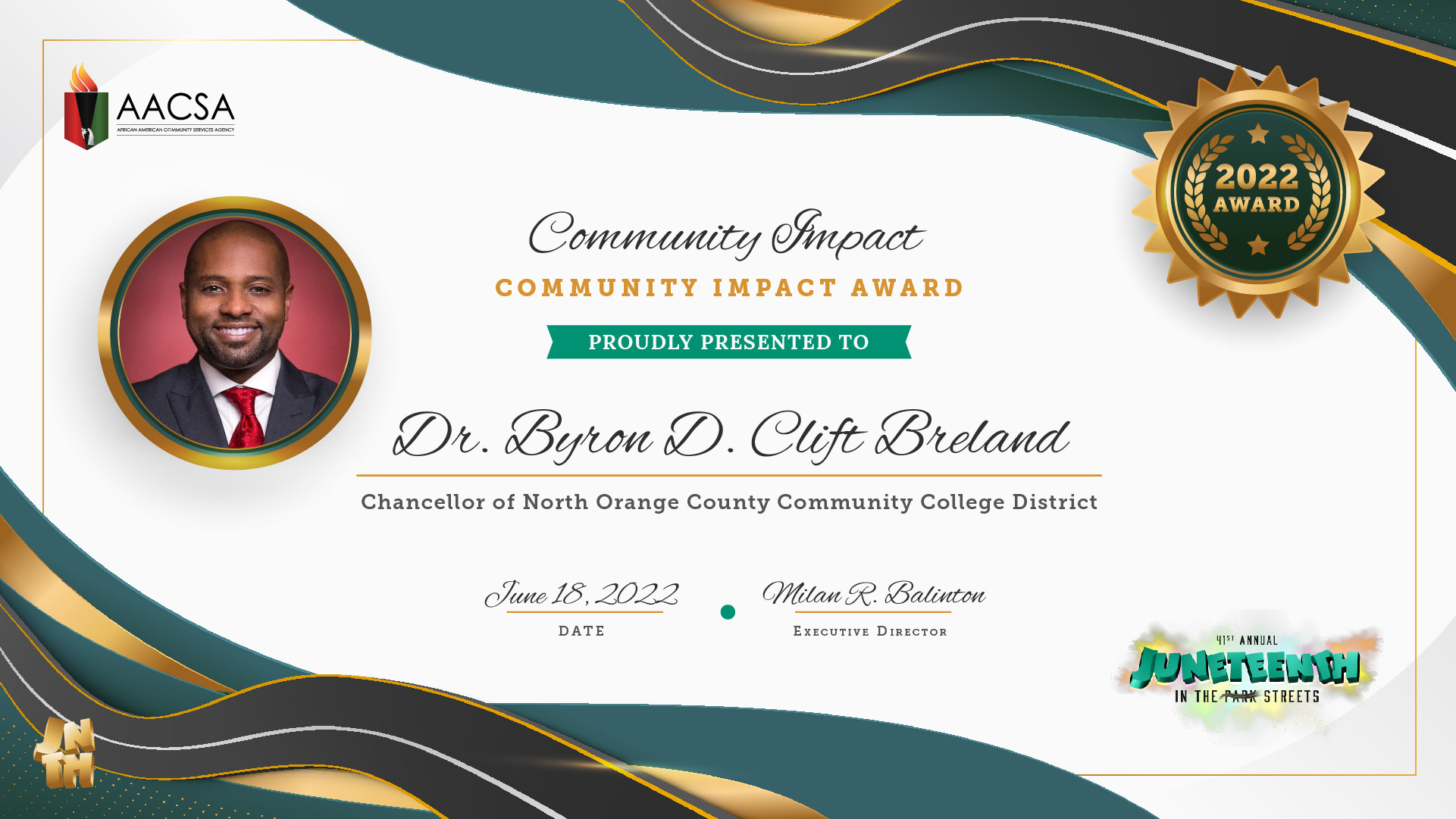 Dr. Byron D. Clift Breland has more than 25 years of administrative and teaching experience in higher education and currently serves as chancellor of the North Orange County Community College District – the fourth largest District in the state of California, with more than sixty thousand students and employs over 4,500 staff. Dr. Clift Breland was the former chancellor for the San Jose – Evergreen Community College District (SJECCD) and served in that position for 4 years. He worked to develop innovative partnerships that provide meaningful educational and job training experiences for the diverse student populations of San Jose City College, Evergreen Valley College, the Community College Extension Center in Milpitas, and the Center for Economic Mobility, located in downtown San Jose.

Prior to being promoted to the SJECCD chancellor position, Dr. Clift Breland served for four and a half years as the president of San Jose City College (SJCC), where under his leadership, SJCC became positioned among the top institutions in the nation in career education and workforce preparation. In addition, Dr. Clift Breland has overseen the opening of a college extension center in the city of Milpitas with a focus on dual enrollment for high school students. He was also instrumental in assisting with launching the San José Promise, which provides up to two years of cost-free education and breaks down financial barriers for students in the city of San Jose. Also, under Dr. Clift Breland’s leadership, both San Jose City and Evergreen Valley Colleges were recognized by the state as top transfer institutions when it comes to transferring African American and LatinX students to four year institutions. The district also renewed it’s accreditation status, and refinanced over 400 million dollars in bonds saving taxpayers over 6 million dollars in taxes, and fees, and reaffirmed it’s A++ credit rating while Dr. Clift Breland was chancellor. In the one-hundred-year history of the San Jose – Evergreen Community College District, Dr. Clift Breland was the first district’s first African American chancellor.

Previously, Dr. Clift Breland served as associate vice president/provost at Long Beach City College’s Pacific Coast Campus; associate dean of student development at Santa Ana College; and assistant dean, director of judicial affairs at the University of California, Irvine, serving both the undergraduate and medical school campuses. In addition, he has held administrative positions at University of Southern California and University of Maryland at College Park.

In 2021, Dr. Clift Breland was elected by his peers to serve as the chair of the board of directors for the Community College League of California (CCLC), and as the president of the Chief Executive Officers of the California Community Colleges Board. In this position, Dr. Clift Breland works with the CA Community College League and all CA community colleges to transform the lives of our diverse students and strengthen communities statewide through advocacy, leadership development, district services, coalition building, and policy advancement. 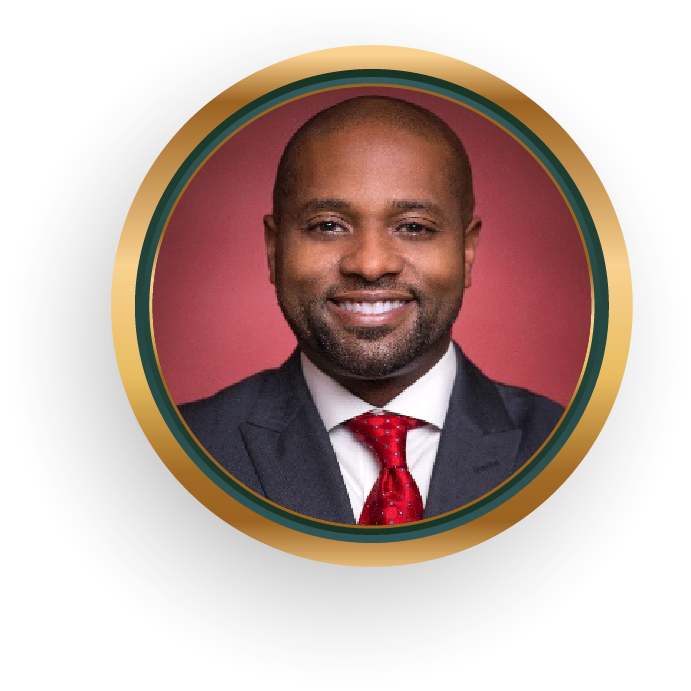