"A Promissory Note In Default" Marcus Washington anchors “Today In The Bay” and “NBC Bay Area News at 11” alongside Laura Garcia.

Before joining NBC Bay Area, Marcus served as anchor and reporter at WJZ (CBS) in Baltimore, Maryland. While working in “Charm City,” he covered a broad range of stories, but his life and approach to reporting were most deeply impacted by Freddie Gray’s death and its aftermath. In the midst of Gray's funeral, explosive unrest in the city, the political fallout, and community rebuilding, Marcus was there reporting live from the front lines and continued the months following. David Zurawik with the Baltimore Sun writes, "Marcus Washington again did solid and authoritative reporting for WJZ from Penn and North avenues, the epicenter of protests following the funeral of Gray last year." His careful and caring coverage of the unrest earned him an Emmy nomination.

Dreams of becoming “one of the people who tells the news” came early for Marcus. He still remembers sitting in his living room at the age of 5 and telling his mom, “I want to do that,” referring to the work of veteran Memphis journalist Joe Birch. Marcus' career in media began while he was a student at the University of Memphis, after inquiring about reading news for Memphis’ WUMR-FM morning show. On his third day of orientation, Marcus received an invitation from the station manager to fill-in to host Thursday's 4p-7p slot. After just 5 minutes on-air, the station manager was so impressed with Marcus’ voice and personality that he walked into the DJ booth and told Marcus, "from now on, this is your slot." Beginning in that moment, Marcus became one of the hosts of Memphis' only jazz station.

He went on to work as an associate producer in Memphis, Tennessee; and as a reporter in Nashville, Tennessee; Tulsa, Oklahoma; and Charlottesville, Virginia, all before his time in Baltimore.

Marcus has been acknowledged by outlets like the Baltimore Sun and the Washington Post for his reporting. He is also flattered (and amused!) to be named one of “Nashville's 25 Most Beautiful People” (per Lifestyles Magazine in 2011) and number fourteen among “The 50 Hottest Anchors in the World” (according to Buzzfeed.com in 2017).

Marcus is also member of The National Association of Black Journalists, Kappa Alpha Psi Fraternity, Incorporated, and the Church of Christ.

He is excited to explore the Bay Area and all the great treasures—especially the food, music, and community—it has to offer. So, don’t hesitate to say hello if you see Marcus out—and follow him on social media for news updates and chronicles of his adventures. 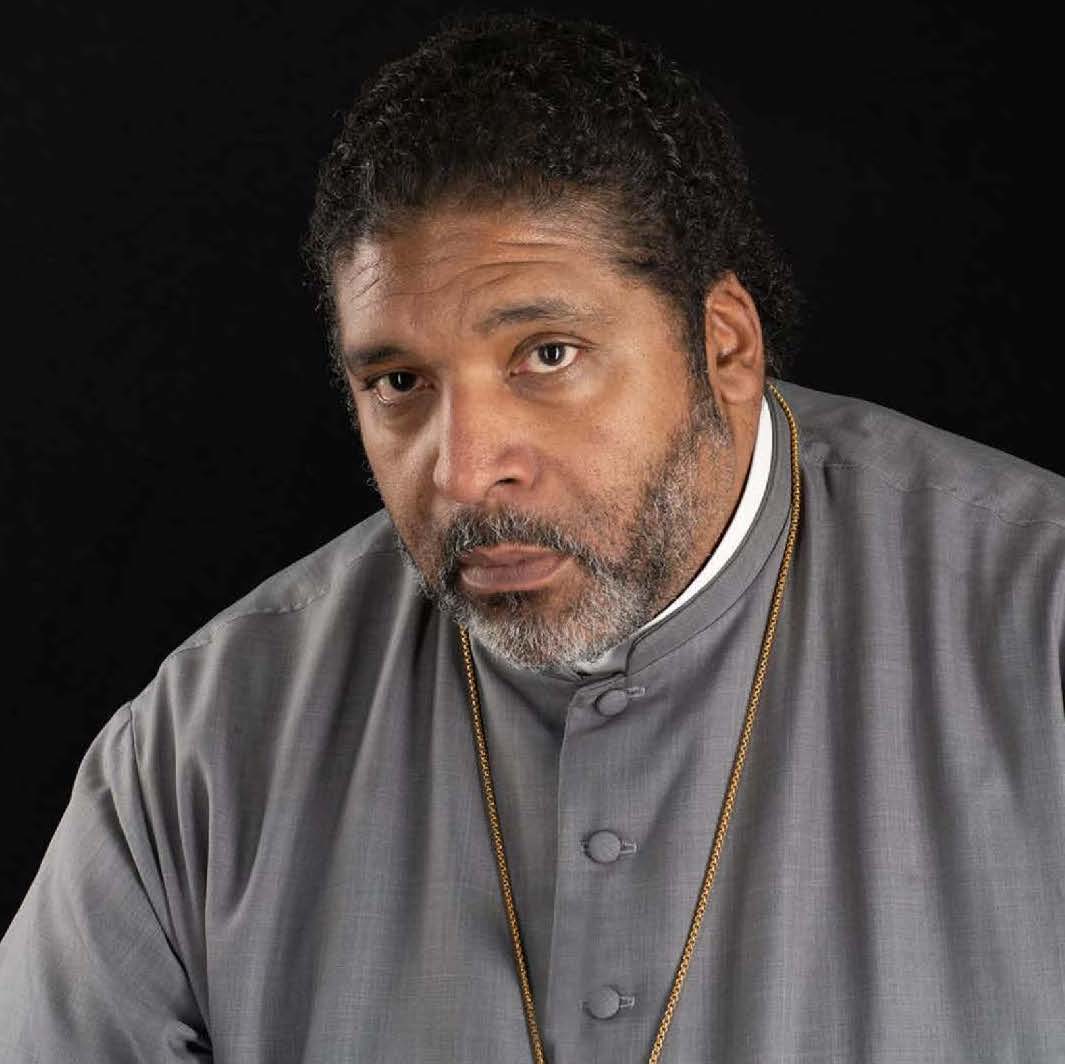 The Rev. Dr. William J. Barber II is the President and Senior Lecturer of Repairers of the Breach; Co- Chair of the Poor People’s Campaign: A National Call For Moral Revival; Bishop with The Fellowship of Affirming Ministries; Visiting Professor at Union Theological Seminary; and Senior Fellow at Auburn Seminary. For more than a quarter century, he has pastored the Greenleaf Christian Church (Disciples of Christ) in Goldsboro, North Carolina. Since Rev. Dr. Barber began his ministry at Greenleaf 29 years ago, the church has sponsored efforts that have led to more than $12 million of community development, in addition to welcoming all into the body of Christ. He is the author of four books: We Are Called To Be A Movement; Revive Us Again: Vision and Action in Moral Organizing; The Third Reconstruction: Moral Mondays, Fusion Politics, and The Rise of a New Justice Movement; and Forward Together: A Moral Message For The Nation.

A highly sought-after speaker, Rev. Dr. Barber has given keynote addresses at hundreds of national and state conferences, including the 2016 Democratic National Convention. He has spoken to a wide variety of audiences including national unions, fraternities and sororities, drug dealer redemption conferences, women’s groups, economic policy groups, voting rights advocates, LGBTQ equality and justice groups, environmental and criminal justice groups, small organizing committees of domestic workers, fast food workers, and national gatherings of Christians, Muslims, Jews, and other people of faith. Rev. Dr. Barber gave the homily at the 59th Inaugural Prayer Service for President Joe Biden and Vice President Kamala Harris. He spoke at the Vatican in 2017 in response to Pope Francis’s encyclical “Laudato Si’: On Care for Our Common Home,” and he was invited again to speak at the Vatican in 2021, at a conference hosted by the Pontifical Academy of Social Sciences. On June 18, 2018, Rev. Dr. Barber spoke before the 5th Uni Global Union World Congress to more than 25 countries and was added to the Black Achievers Wall in the International Slavery Museum in Liverpool, England. He has had 10 honorary degrees conferred upon him.

Rev. Dr. Barber served as president of the North Carolina NAACP, the largest state conference in the South, from 2006-2017 and served on the National NAACP Board of Directors from 2008-2020. A former Mel King Fellow at MIT, he is currently Visiting Professor of Public Theology and Activism at Union Theological Seminary and Senior Fellow at Auburn Seminary. Rev. Dr. Barber is regularly featured in media outlets such as MSNBC, TIME, CNN, New York Times, Washington Post, and The Nation Magazine. Rev. Dr. Barber was named one of BET’s 100 Entertainers and Innovators in 2020, and he is a 2019 recipient of the North Carolina Award, the state’s highest civilian honor. Rev. Dr. Barber has also received the MacArthur Foundation Genius Award, the Franklin D. Roosevelt Four Freedoms Award, the Martin Luther King, Jr. Center’s Beloved Community Award, and the Puffin Award. Judge LaDoris Hazzard Cordell is a legal commentator and police reform advocate, who is a frequent commentator on news outlets including NPR, CNN, and MSNBC. A graduate of Stanford Law School, she became the first African American woman jurist in Northern California, a position she held from 1982 to 2001. Prior to her time on the bench, she was the first lawyer to open a private practice in East Palo Alto, CA, a low-income community of color, and was an Assistant Dean of Stanford Law School where she implemented a highly successful minority admissions program. Following her retirement from the bench, she was a Vice Provost at Stanford University and, in 2010, was appointed the Independent Police Auditor for the City of San Jose. Judge Cordell’s public service record spans decades, during which time she has overseen commissions that investigated violence and mental health care in the jail system, as well as accounts of racism in the San Francisco police department.She has received numerous awards, including Silicon Valley NAACP’s William E.B. Dubois Award, the Iola Williams Public Service Award, the National Council of Negro Women’s Public Service Award, the Social Justice Award from Legal Advocates for Children & Youth, and the Rose Bird Memorial Award from the California Women Lawyers. Judge Cordell founded the African American Donor Task Force to increase black participation in the national bone marrow registry. She is the co-founder of the African American Composer Initiative and CA Parks for All. An artist and pianist, she resides in California with her partner and is the proud mother of two daughters.

Capture the attention of the complete Virtual MLK Luncheon attendee or pinpoint a group particular to your organization’s specialized interests by being a sponsor at the 41st Annual MLK Luncheon. With one of these unique opportunities you have the flexibility to deliver a message, drive brand recognition or create an opportunity for interaction. A representative from the African American Community Service Agency, the host for the luncheon, can provide you will full details, options and pricing for any of the high-visibility Premier Opportunities identified here.

As a virtual vendor, not only will you be able to distribute your information at the 41st Annual MLK Luncheon, we also will provide you additional exposure via our web site. A representative from the MLK Luncheon Vendor Selection Committee, can provide you with full details on the package and information needed to ensure your business is promoted on our website before, during and after the event.

Thank you to those who chose to be a part of the MLK Luncheon experience by placing your ad in our Souvenir Journal!